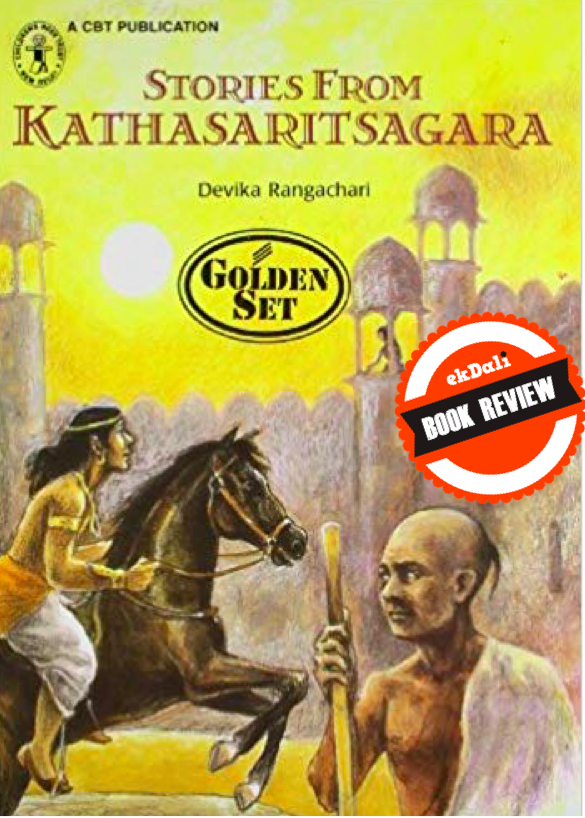 Kathasaritsagara is a collection of 11thcentury India Fairy Tales and legends retold in Sanskrit by SomaDeva.  It means “ The Ocean of Stories” and rightly so because there are 18 books with about 124 chapters each.  Stories are themed around love, loss, intrigue, bravery and wisdom.

“ Stories from Kathasaritsagara” by Devika Rangachari are a collection of 10 of the best from this vast ocean of stories. They have been retold in a simple and lucid manner in simple English.

The first story is about a man called Putraka who founded the city of Pataliputra. The plot is filled with twists and turns. Putraka escapes an assassination attempt by his own father. He comes in possession of magic flying shoes, a vessel that makes food on its own and stick that can bring to life whatever one writes with it. Putraka falls in love with a princess Patali and creates the city of Pataliputra in her honor.

Sample another one. The Abandoned Children about the story of how a brother and sister are lost in a forest and what becomes of them. This is an Indian version of the much more recent Fairy Tale Hansel and Gretel.

As with any work of literature pre-dating our times, if the book is to be read to a younger audience, parents might have to modify it a little and suit it to context. But, for older kids the stories can be read as is,  and will provide a great insight into the cultural ethos of the time and place they were set in. Some stories have a moral take away, some don’t. But the plots are almost always twisted and the kids are likely to read through it as it will be pique their curiosity.

Buy your copy at just INR 88 here
Educational Value: 5/5
Role Models & Attitude Portrayal: 4/5 ( Characters have to be given a leeway because they are part of a different social context)
Age Band - broad band : 12+ years